A new 12-sided one pound coin based on the threepenny bit has been unveiled – and is said to be the hardest in the world to fake.

Described as a “giant leap into the future” the new coin will replace the existing £1 coin which the Treasury says has a 3% forgery rate – which amounts to a total of more than 45 million in circulation. 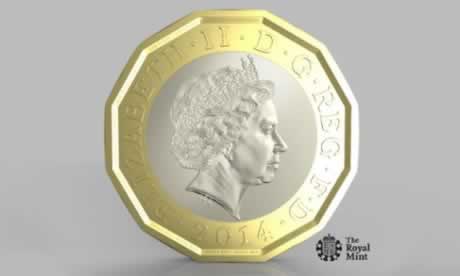 The coin is based on the historic three pence piece which was the first coin to feature a portrait of Queen Elizabeth II and in circulation between 1937 and 1971.

Unlike its predecessor, the new coin – which is planned to be roughly the same size and will be introduced in 2017 – will contain an array of technological advances making it difficult to forge.

As well as it's bimetallic construction, the new £1 will feature new security pioneered by the Royal Mint.

A Treasury spokesman said: “After 30 years’ loyal service the time is right to retire the current £1 coin and replace it with the most secure coin in the world. With advances in technology making high value coins like the £1 ever more vulnerable to counterfeiters it’s vital that we keep several paces ahead of the criminals to maintain the integrity of our currency.”

“We are particularly pleased that the coin will take a giant leap into the future, using cutting edge British technology while at the same time, paying a fitting tribute to past in the 12-sided design of the iconic threepenny bit.”

The Royal Mint chief executive, Adam Lawrence, said, “The current £1 coin design is now more than 30 years old and it has become increasingly vulnerable to counterfeiting over time.

It is our aim to identify and produce a pioneering new coin which helps to reduce the opportunities for counterfeiting, helping to boost public confidence in the UK’s currency in the process.“

As with all British coins the Queen’s effigy will be on the “heads” side, while the Treasury has said there will be a public competition to decide the design for the “tails” side.