The Scottish author Nan Shepherd, who explored the Cairngorms in her classic text The Living Mountain, is to feature on the new RBS £5 note which will enter circulation later this year.

Shepherd was chosen by the Royal Bank of Scotland board after the scientist Mary Somerville was selected as the image for the Scottish £10 note by public vote. The new £5 note will enter circulation later this year, with the £10 to follow in 2017. 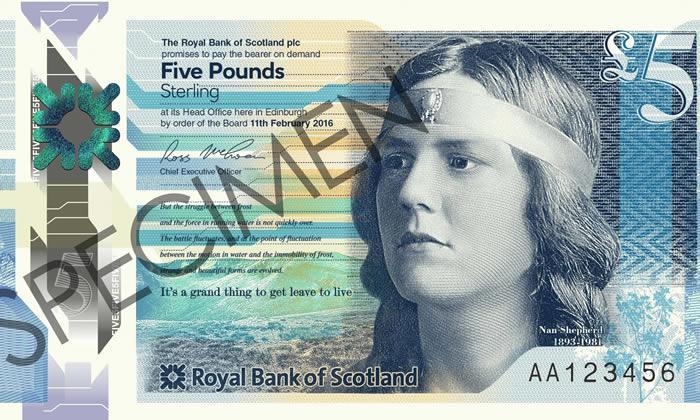 As well as an image of Shepherd, the £5 note features a quote from the author’s first novel, The Quarry Wood – “It’s a grand thing to get leave to live” – and one from her meditation on the Scottish landscape, The Living Mountain: “But the struggle between frost and the force in running water is not quickly over. The battle fluctuates, and at the point of fluctuation between the motion in water and the immobility of frost, strange and beautiful forms are evolved.”

Born in 1893, Shepherd spent all her life in Aberdeen. She wrote her 80-page meditation on the Cairngorm mountains during the second world war but only published it in 1977, four years before her death. By the beginning of the 21st century, it was almost forgotten, but a resurgence of interest in nature writing has seen Shepherd’s books enjoying a new lease of life.

The writer Robert Macfarlane, who wrote an introduction for the 2011 reissue of The Living Mountain, called Shepherd a “brilliant, progressive choice” for the £5 note. “She’s an incredibly inspiring figure, and an unusual one, in the sense of
being a woman writing about mountains and the wilderness and nature,” he said. “She found her own path in life and in literature, and it feels like she’s so far ahead of us – we’re always only starting to catch Nan up. Philosophically and stylistically, she was extraordinary.”

The reverse of the £5 note features an excerpt from Gaelic poet Sorley MacLean’s poem The Choice.

Each note also features a midge, to “represent the reality of everyday living in the Scottish countryside”, according to RBS. “It’s a reminder that Scottish nature nips us as well as thrills us,” said Macfarlane.