The Bank of England will introduce a new-style £50 banknote into circulation on 2 November 2011.

A range of new and enhanced security features have been incorporated into the design of the Boulton and Watt £50 banknote. Full details of these will be revealed when the new banknote is introduced into circulation, accompanied by a publicity and education campaign. 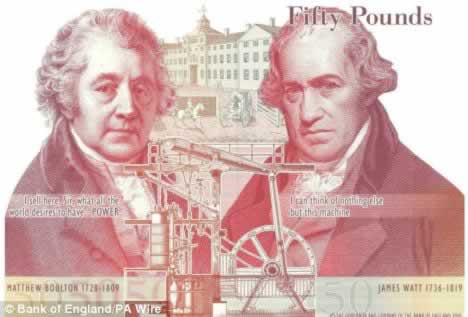 The Boulton and Watt £50 banknote marks the first time two portraits have appeared together on the back of a Bank of England banknote.

It will also be the first banknote in circulation to be signed by Chris Salmon, who was appointed as the Bank’s Executive Director, Banking Services and Chief Cashier in April 2011.

As new-design banknotes are introduced so the notes they replace are withdrawn – although they can always be exchanged with the Bank of England for their face value. The Boulton and Watt £50 banknote will initially circulate in tandem with the current £50 banknote featuring Sir John Houblon, the first Governor of the Bank of England, which was introduced in 1994. The Bank will make an announcement regarding the withdrawal date of the Houblon £50 banknote in due course.

Boulton & Watt
Boulton was a leading light of the Industrial Revolution. After leaving school, he worked in his father's buckle-making factory, in Birmingham, which he later inherited.

He was particularly interested in the development of steam engines and the minting of coins.

In 1775 Boulton went into partnership with Watt, whose improvements to steam engine design had led to greater efficiency and cheaper running costs.

The pair pioneered the use of steam engines in the cotton-spinning industry.

Watt was involved in several civil engineering projects. In 1773, he was commissioned to do a survey and estimate for building a canal between Fort William and Inverness - the Caledonian Canal was constructed in the early 19th Century.