Jane Austen to feature on Bank of England banknotes

Bank of England Governor Mark Carney has confirmed that Jane Austen will appear on a forthcoming banknote.

At an event at Jane Austen’s House Museum on Wednesday 24th July, Carney confirmed that the Austen note will be issued as a £10 note, within a year of the Churchill £5 note, which is targeted for issue during 2016. 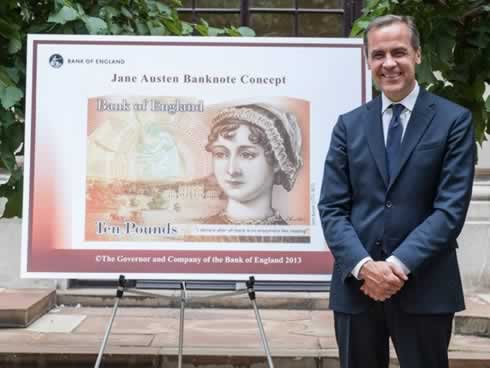 Commenting, Carney said: “Jane Austen certainly merits a place in the select group of historical figures to appear on our banknotes. Her novels have an enduring and universal appeal and she is recognised as one of the greatest writers in English literature. As Austen joins Adam Smith, Boulton and Watt, and in future, Churchill, our notes will celebrate a diverse range of individuals who have contributed in a wide range of fields.”

Features of the design on the reverse of the Jane Austen note will include: