The Bank of England Governor, Mark Carney, has announced that J.M.W. Turner will appear on the next £20 banknote due to be issued by 2020.

At the announcement at the Turner Contemporary in Margate, the Governor also revealed the image of Turner that will be used on the note.

The selection of Turner is the first time the Bank of England has used the more open and transparent character selection process announced in December 2013. 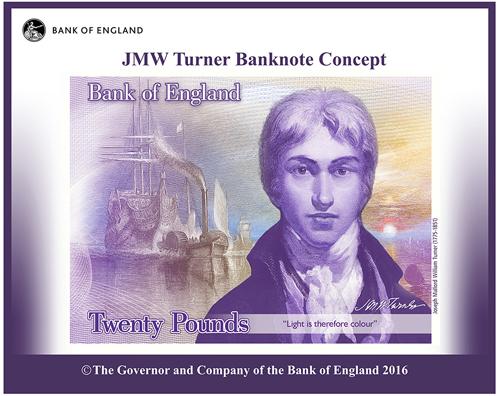 The process began in early 2015 with the formation of the Banknote Character Advisory Committee which as its first act selected the visual arts field. This was followed by a two month nomination period in summer 2015 during which members of the public could suggest a figure from the visual arts.

The Bank received 29,701 nominations covering 590 eligible characters. The Committee, with input from public focus groups, then produced a shortlist which it discussed in detail with the Governor who made the final decision.

Commenting on the decision, the Governor said: “I am delighted to announce that J.M.W. Turner has been chosen to appear on the next £20 note. Turner is perhaps the single most influential British artist of all time. His work was transformative, bridging the classical and modern worlds. His influence spanned his lifetime and is still apparent today. Turner bequeathed this painting to the nation, an example of his important contribution to British society.

“I would also like to take this opportunity to thank all the people who got involved in the process and that sent us their suggestions for visual artists to celebrate. The range and breadth of these nominations is testament to the UK’s achievements in the arts and the public’s passion for it. The Banknote Character Advisory Committee did an outstanding job of working through these nominations. Their help in reaching today’s decision was invaluable.”

Speaking at the announcement, renowned artist Tracey Emin said: “It’s so amazing that an artist has been chosen for the £20 note and an artist who was a wild maverick. It’s wonderful that Britain’s creative side is being honoured in this way and of course I am especially happy because it is Turner and he loved Margate.”

As shown in the concept image, the design on the reverse of the note will include:

The full design of the note and its security features will be unveiled closer to it entering circulation.