Clydesdale Bank's more durable £5 note, issued in March 2015, has secured a nomination for the title of bank note of the year.

They were the first in the country to be made entirely from polymer - meaning they are less likely to tear and become dirty than paper ones.

The UK will compete with bank notes from Singapore, New Zealand and China for the title awarded by the International Bank Note Society. 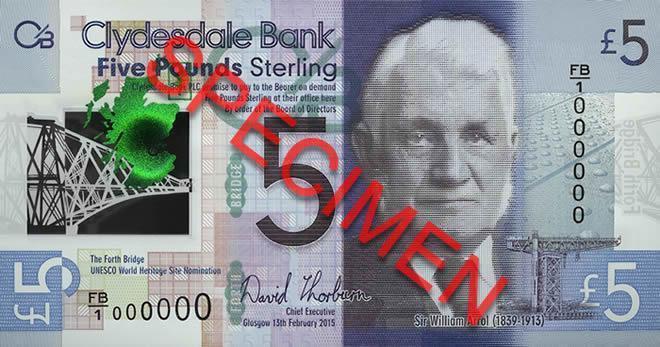 Clydesdale Bank chief executive David Duffy said: "The note has proved popular with the public and businesses since its launch thanks to its iconic graphics and durable design.

"We take our responsibility as an issuer of bank notes seriously and are excited to be leading the way in innovation."

The notes were issued to commemorate the 125th anniversary of the opening of the Forth Bridge, pictured on the reverse side of the note.

A security feature in the form of a transparent window changes colour as the note is moved and tilted.

Around two million of the notes featuring a portrait of Scots engineer William Arrol (1839-1913) are currently in circulation.