The Association of Convenience Stores published it’s 2016 Crime Report on the 17th of March revealing that crime against local shops cost an estimated £122m, or £2,370 per store.

The annual report provides insights into the cost and impact of crime on convenience retailers in the last year and presents the findings of the ACS’ annual crime survey. 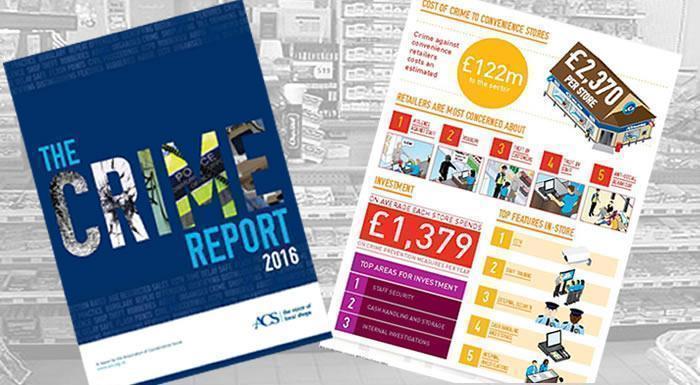 Drawing upon the experiences of 7,031 convenience stores and data from 24 different retailers, the ACS report details the incidences of crime, the cost of crime, investment into crime prevention measures, as well as providing information on crimes such as shop theft, violence and verbal abuse, robbery and burglary.

Shop theft remained the most prevalent crime in the sector, with over 287,000 incidents recorded, costing retailers a total of £43 million. There were also 7,455 recorded incidents of staff theft, costing a total of £19m, while 15% of stores were the victim of either a robbery or a burglary.

The costs were sadly not just financial, with over 10,000 shop workers injured in attacks last year and half of convenience store staff suffering verbal abuse.

New for 2016, the ACS has developed important guidance for retailers covering the key risk areas identified in the report. It examines how retailers can work to prevent incidents, provide support on identifying staff theft and suggestions on how to deal with offenders..

Additionally, this is the first year that the ACS’ has also asked respondents for information about their experience of fraud and the findings are significant. Fraud cost the convenience sector a total of £36 million in the last year. With 81% of customers paying by cash in convenience stores (according to the ACS Local Shop Report 2015), counterfeit notes represent the most common fraud to retailers.

The ACS feels that the introduction of polymer banknotes will help crackdown on the number of incidents of counterfeit banknotes - as they incorporate additional security features that make them more difficult to counterfeit than paper notes.

Convenience retailers also continue to invest significant amounts in crime prevention measures with an average of £1,379 being invested per store. The top three areas for investment were noted as being 1) staff security, 2) cash handling & storage, and 3) internal investigations.

Other key findings from the report include:

The full report, guidance and press release are available on the ACS' website